New York is a different country. Maybe it ought to have a separate government. Everybody thinks differently, they just don’t know what the hell the rest of the United States is.

So, you’ve landed in the big city and now you’re wondering what to expect.  Below is a list of things you’ll probably first notice about NYC and how to get accustomed to them…

Things will be loud.  Horns will honk, people will yell and curse, garbage trucks will screech and grumble.  You’ll wonder how it’s even possible that there could be so many different noises in one place. But eventually you’ll find yourself embracing it – just give it time.  You’ll smile as two firetrucks scream by and say “ahhhhhh – I love New York”.

There will be bums and crazies. Yup, shit gets crazy in New York.  You’ll be solicited for money on the sidewalks, in the subways, and outside your favorite bar.  And on some unfortunate occasions, you may encounter a “flasher” who exposes himself for fun or someone taking care of “business” in the corner on the C train.  When you see these people follow these rules:

People will invade your personal space. According to Wikipedia, New York City has a population of approximately 8.4 million people and Manhattan has a population density of 66,940 people per square mile.  Naturally, sidewalks are chaotic and hard to navigate, elevators are packed, and you may have to get too close to that guy’s armpit on the subway during rush hour.  Once you become more familiar with getting around, you’ll be able to avoid the more crowded areas of the city.  A good tip for subway is to find a spot away from the doors.  You’ll be bothered a bit less by people getting on and off the train, and you’ll likely have some more space than others.

Stuff will be old and dirty. New York City is pretty old, which is cool when you look at it from a cultural and historical stand point, but when it comes to restaurants and apartments, old may not be everyone’s cup ‘a tea.  The key here when looking for a place to live, is to keep looking until you find a place that you feel comfortable in (despite its age and size) or ask for a post-war building.  As for restaurants, just be assured that they all have to be up to code per the Health Department, otherwise they get shut down.  Eventually, you’ll find some hole-in-the-wall restaurant or bar and think it’s the coolest place you’ve ever been in.  McSorley’s for example:

Patience is not a virtue. It’s no secret that New Yorkers have a reputation for being rude, jaded, and impatient.  Sure, New Yorkers in general may not be as courteous or hospitable as, say, someone in a small country town, but they certainly can be a helpful people. Don’t take it personally if you step into line at a deli to grab a sandwich and feel a bit rushed to finish your order and “step down” (as you’ll hear some clerks say).  That’s sort of just how things are done in the City – there are a lot of people to serve or take care of.  But if you ever need directions or don’t know which subway to take, New Yorkers are always more than happy to help you if they can.  They’re generally pretty proud to give out advice.

Things will be ridiculously expensive. This may be the one of the first things you notice.  ATM fees can be $3.00 if it’s not your bank.  I’ve spent over $12 on just milk and cereal.  If you can find a beer for less than $7, it’s a great deal.  One of the tricks to not burn a hole in your pocket the first week you get here, is to avoid at all costs tourist areas and find the more residential spots.  You can generally find a good meal for a reasonable price and standard prices for groceries and other necessities.

You can find stuff open at all hours of the day and night. New York is the city that never sleeps, after all.  This is probably one of the more pleasant surprises you’ll come across.  If you live in the city (or you’re just out really late), you can find just about anything at any time.  There are lots of mini-marts, drug and convenience stores, and markets open 24 hours within walking distance.  So if you need to grab something at 3:30 in the morning, you’ll find it in the City.

Your perception of walking distance will change. In New York, you’ll be walking a lot, simply because sometimes it is the easiest and most convenient mode of transportation.  You may look at a map and see that you need to walk 10 blocks and 5 avenues to get to your destination – that’s about a mile’s distance.  Before getting to New York, you may have never hesitated to jump in your car to travel anywhere a mile away.  But in most cases, walking this in the city is often the natural choice.  The great thing about it is, you’re exercising without even knowing it! 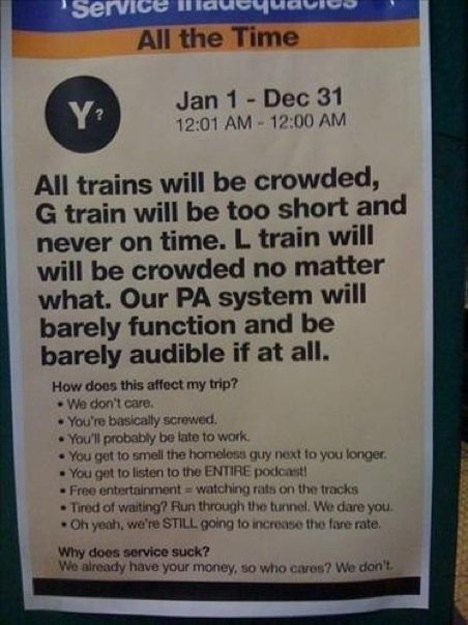 Public transportation will not always be reliable. Playing off of the point above, walking is sometimes the choice mode of transportation because the public kind is not always reliable.  There is often construction, service changes, or some other excuse for why the train you wanted to take doesn’t work.  You’ll start to wonder where your $2.50 a ride is going and why the service isn’t better.  Don’t worry, we all do.  However, one thing you can count on is that a majority of the time, the services changes are on weekends or late nights, and they are routine for several months.  So the first time you find out that line isn’t working at a certain time, you can count on it being that way for a while.  To make this the least frustrating as possible check the MTA Service Alerts and the MTA Trip Advisor if you’re unsure, and give yourself extra travel time on weekends and late nights.

People will have accents. You may find yourself struggling to understand a few people you come across in the.  Between the different catch phrases or sayings (depending on where you’re coming from) and the distinct accent, don’t be surprised if you have to say “sorry, I didn’t understand”. Also, did you know, that each borough of New York City has a distinct accent of its own?  See if you can identify them all within you’re first month in the City.

Filed Under: About New York Tagged With: accents, culturalisms, how to, New Yorkers, subway

Cyndi joined "Become a New Yorker" in the fall of 2010 as a content contributor.

She was born and raised in Long Island, NY and then moved down to the DC Metro area for a few years, only to come back to NYC to finish college and start her career. Some of her favorite things about the City are its diversity, variety of things to do, and unique places to eat. She is especially fond of its dirt, grime, and the fact that "it feels like a real city".

Cyndi is hardcore and a level 80 Night Elf Druid.